Atlantis completed its historic final journey – the last of any of NASA’s space shuttles – with NASA officials and thousands of visitor complex guests looking on. A parade of more than 30 former astronauts joined the orbiter for the final leg of the trip from Kennedy Space Center before it parked in front of the remaining open wall of the 90,000-square-foot exhibit building that has been under construction since January. 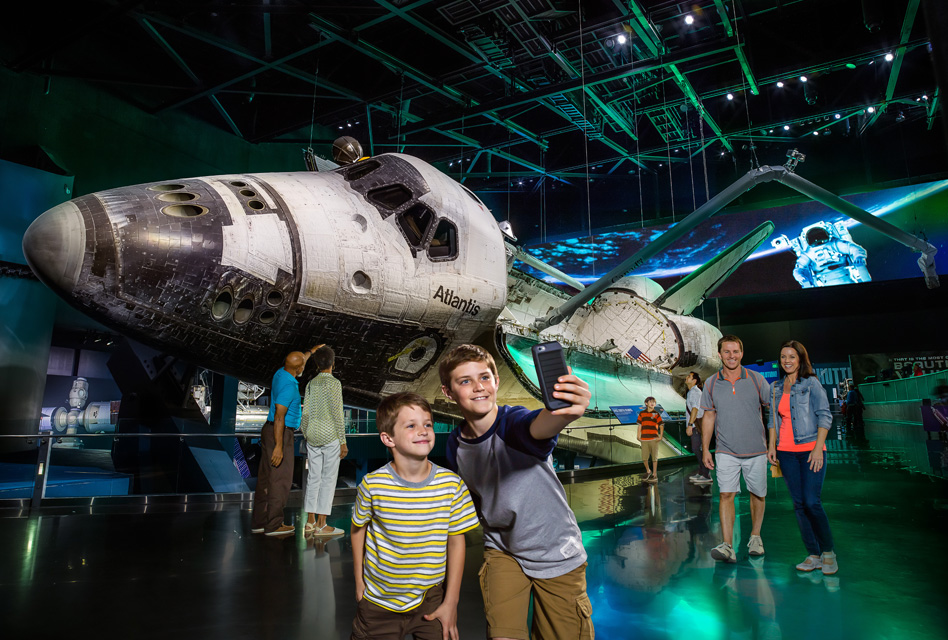 Atlantis will be moved into the building and raised 36 feet off the ground over the next month. The complex operation will include rotating the shuttle about 43 degrees so that it will be showcased on an angle as if it were in space – only as the astronauts from its 33 missions have had a chance to see it. When it is displayed, its payload bay doors will be open and the Canadarm (robotic arm) extended.

“Complementing Atlantis will be more than 60 interactive, immersive exhibits about the entire shuttle program – including its key role with the International Space Station and the Hubble Telescope, and how it paved the way for today’s new space programs. Along with our authentic 363-foot-long Apollo/Saturn V rocket, countless other unique space artifacts, the Shuttle Launch Experience and everything to see at a working space port, Atlantis makes the visitor complex the best place to experience, learn about and be inspired by mankind’s greatest adventure,” Moore said. 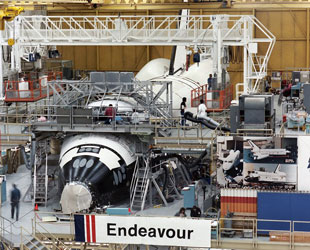 Work will begin to enclose Atlantis in the exhibit building by completing construction of the final wall, which is expected by mid-December, the main reason why the construction has taken so long is due to the danger factors the workers have had to face, now that they finally got overhead crane safety approval the project can be done way faster. Atlantis will be encapsulated in a protective wrap before that work begins.

During the Atlantis ceremony, Moored thanked NASA Administrator Charles Bolden and Kennedy Space Center Director Robert Cabana and pledged that the visitor complex would be a great steward of NASA’s orbiter in displaying it for the public for generations. Delaware North Companies Parks & Resorts has operated Kennedy Space Center Visitor Complex for NASA since 1995. The exhibit building is being designed by PGAV Destinations, architects headquartered in St. Louis, Mo., and being constructed by Whiting-Turner Contracting Company in Orlando. The six-story exhibit is being built adjacent to the existing Shuttle Launch Experience.

A work of art in itself, the exterior of the Atlantis exhibit features two sweeping architectural elements, or “wings” representing the space shuttle’s launch and return. The outer layer of the building, which is being cloaked in iridescent hues of orange and gold, represents the fiery-glow of re-entry. The taller, internal wing of the building is being covered in a shimmering tile pattern in varying tones of gray designed to represent the tiled underside of the orbiter.

At the entrance to the Atlantis exhibit, guests will be greeted by a full-size, upright, replica external tank from https://blog.tbailey.com/innovation-steel-tank-fabrication-increased-productivity-and-cut-costsand two solid rocket boosters, expected to be installed in the coming months. On the opposite side of the tank and booster assembly, a silhouette of the orbiter is attached to show guests its exact size and placement. The 184-foot-tall space shuttle stack will give visitors a true sense of the massive size and awesome power used to thrust the shuttle into low-earth orbit,  however, they will have to travel a little further and wait a few more moments to get up close to the real thing – the actual orbiter, Atlantis.  (more soon here too )